When we reached out to Kennedy Club Fitness about partnering up for a case study on the effectiveness of our digital lead generation tablet in a gym setting, they were just coming off of a two-month personal training services sales slump. General Manager Mark Pazell was excited about the potential of our system, and agreed to implement the lead gen tablet in the Club’s Arroyo Grande, CA location.

The first month our tablet was installed, KCF experienced an 87% increase in PT sales over the previous three-month sales average!

For the full testing period, PT sales averaged out at 33% higher than the previous three month average, restoring life to a struggling PT program.

In addition to revenue benefits, General Manager Mark Pazell sees the Off Day Trainer lead gen tablet as a technology package that could potentially replace a costly salaried Fitness Director position, since the tablet is capable of generating leads, setting up appointments, and sending reminders and motivational messages all with little or no manual labor.

Traditionally, personal training leads are generated through a labor-intensive process that requires staff to sift through lead box slips and interest lists and manually place calls or send emails to follow up with prospects. If and when an initial consultation is finalized and the prospect shows up, the trainer can attempt to make the sale.

How About a 592% Increase in Conversion Rate?!

Before Off Day Trainer came in, KCF’s Personal Training staff was only closing sales with about 5% of the prospects they met with. With the increased engagement and streamlined approach our system affords them, along with a little sales training from ODT Co-Founder David Pitts, we boosted KCF’s close rate to a whopping 34.62% during our two-month study period!

Before implementing the Off Day Trainer tablet, a dead lead was just considered a lost cause and discarded. With Off Day Trainer, the opposite is true: each and every lead opts into more than just an appointment request; they’ve opted into a fully-featured motivation and accountability platform that will send them frequent KCF-branded text messages to keep them on track to achieve the goals they specified in their questionnaire.

Even if the prospect doesn’t buy PT services during the initial consultation (or ever), they’ll still be engaged and motivated on a regular basis, heightening their perception of the value delivered by KCF.

So what did Kennedy Club Fitness have to say?

“Having been a fit pro for over 20 years, I’ve seen a lot of cool marketing concepts come and go. When David presented Off Day Trainer and the lead generation tablet, I immediately understood the value in the concept but wasn’t sure how it would work in my facility. It’s definitely innovative, and I saw promise so I gave it a shot.

2 months after installing the tablet in my gym, I’ve seen PT sales raise 33% and payroll drop considerably. The tablet creates member awareness for Personal Training which creates a great opportunity for the up sell and streamlines the process for scheduling training consultations. The entire on boarding process is automated and knowing that I’m connecting via text is the best part as I’m certain that my messages are being read, immediately.

Off Day Trainer has helped me to reduce staff costs and makes for a seamless experience with both my members and trainers. My trainers have never been busier or more confident and my members feel we are providing more value.

It’s not only helped us get more leads in, with David’s sales training videos, my trainers are closing more prospects than ever before, which means ultimately, we are helping more people than ever before. At the end of the day, that’s really what this business is all about. Off Day Trainer truly is a win/win for everyone!”

Download this Case Study and Register for your own fitness tablet 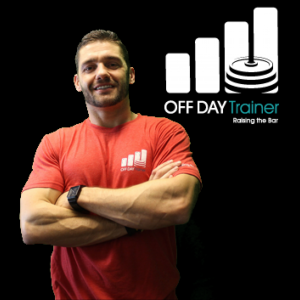 David Pitts With over a decade of experience in the Health and Fitness industry, I've developed an obsession to help both fit pros grow their business and fitness enthusiasts achieve their goals.

So You Want To Be A Trainer Read time: 10 minutes

Top 20 most effective text messages to send your clients!

Thank you for joining - you will receive a confirmation text shortly!
You will receive up to 8 messages per month. Msg and data rates apply. Text STOP to stop. Privacy Policy | Terms and Conditions